After the break up I was left with very little. Up until that point we had been sharing a vehicle that was in her name and when she left I did not have a way to get myself to work and back anymore. Since giving up was never an option for me I did what I had to do: I asked a friend if he could take me to Wal-Mart and I left with a $100 bicycle.

When I got home I went straight to my computer, got online and began plotting out how I was going to make the six mile journey to and from work each day.

It was not easy, but it was the best I could do at the time. After a while I really started to enjoy and actually looked forward to my rides to work every day. Sometimes I would even leave several hours before I had to work just so I could take my time and explore different parts of the city that I had never seen before.

After a few weeks my co-workers and a few of my regular customers started to notice how much I had been cycling and commented on how different I looked. They were amazed with my weight loss and could not stop telling me how much happier and healthier I looked. Clearly I was onto something. I asked myself, "Could exercise and losing weight really be this fun and simple?!"

In those first three months alone I went from weighing 330 pounds to weighing 290 pounds. Eventually cycling became my passion and my obsession: I was riding my bike everywhere!

After working at the convenience store in Florida for a few months I had finally saved up enough money to move back home to Michigan and start fresh. It was not long after my return home that I found some work as a sub-contractor doing exterior and interior house painting for the landlord of a friend of mine. I loved how physically demanding that job was. A typical work day would begin with a sixteen mile bike ride to get to my boss' house in the mornings, then I would follow that up with an 8 to 9 hour day of physical labor before having to make the sixteen mile ride back home.

After a few days on the job I told my boss about all of my weight loss efforts and he told me that he couldn't help but notice how quickly my weight was melting away before his very eyes. After four months the season had come to a close and I was already down to 270 pounds! This was awesome!

Around this time there were a lot of other changes taking place in my life as well: I was in the process of moving into my friend's basement, I had finally started to feel comfortable enough to go out on dates again, and for the first time in my life I was truly living for me.

Soon exercise began filling up the all of the empty spaces in my life and many of my bad habits fell by the wayside. The more I exercised, the less I smoked. Eventually I just picked a day that I was going to do it and I just stopped. For several years I survived on nothing but fast food. I learned the hard way that exercise and fast food do not mix very well. It did not matter if I was riding to work or if I was getting ready to go on a 100 mile bike ride, fast food was just not cutting it for me anymore. Naturally I shifted my diet toward healthier foods like granola bars, clif bars, and lots and lots of water!

Even though I was working harder than ever before and cycling as often as I could, my weight loss eventually became stagnant. After doing a bit of research I decided that it was time for me to make some changes in my exercise regimen.

Then one day a military friend of mine invited me to go out for an "easy" one mile run with him. I figured that with all the cycling I had been doing every day, this was going to be a walk in the park. Boy was I wrong! By the time I had finished the run I was completely out of breath, lying on the filthy street outside of our house and loving every minute of it!

My addictive personality had finally found a new drug to latch on to and that drug was running. You see, I thrive on setting and achieving goals. Sure cycling had been fun, but it wasn't challenging me anymore. Running was hard and I knew deep down that I needed something that hard if I was ever going to achieve my the results I wanted.

So I caught the bug: When winter came I set my bike aside and began running to work every day instead. After a few months of that I decided it was time for me to sign up for my first road race.


All two-hundred & fifty pounds of me! 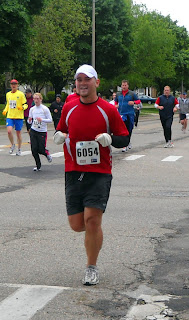 After that I was completely hooked on distance races. They gave me something to train for; something to look forward to. They were also a really fun and simple way to gauge and measure my progress.

I now weigh about 200lbs, I have six full marathons under my belt along with several shorter distance races and many, many more planned for the future.

So after everything that has happened and everything I have been through, I can honestly say that every day that I wake up alive is the best day of my life! 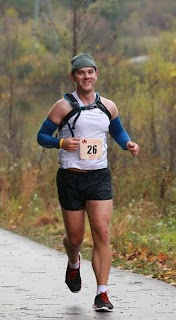 Popular posts from this blog

January 13, 2012
When I first started running in the summer of 2009, I was definitely not the runner I am today. I was slow, I was inefficient, and like most beginners, I struggled to get through my daily runs. Over the past two years however, I have learned a lot about running. The majority of what I learned came from reading books and magazine articles. They gave me a lot of helpful pieces of advice that uniquely improved my running performance. These tips were invaluable, and I am grateful for the incredible people who took the time out of their busy lives to write down what they learned, so that people like me could benefit from them. To pay homage to them, I thought it would be nice if I wrote down a few things that I have picked up along the way that might benefit you in the future. So here we go! 1. Less is more. When I first started running, I was completely horrible at it. I had no idea what I was supposed to do. Naively, I thought I could just strap on a pair of running shoes and e
7 comments
Read more

awesome secret to help you exercise every day

January 20, 2014
I was thinking about this the other day and I realized that I have unknowingly developed a rather fool-proof system which has, regardless of the weather or how busy I am, really helped get me motivated to work out every single day for over four years! So what is this incredible, awesome, bad-ass system you ask? Simple... I do NOT  allow myself to take a shower unless I have earned it through working out/exercising for at least  30 minutes. As a side note: said workout also has to get me relatively smelly and/or sweaty... and no... there are absolutely NO exceptions... If I need to be somewhere and I want to take a shower beforehand, guess who needs to make some time to work out an hour prior to leaving? You guessed it... At this point you probably think I'm crazy, but this system is actually quite beautiful once you get it installed in your own life. For me, taking a shower has become such an integral part of my daily routine that I honestly have not had the optio
1 comment
Read more

why you should exercise (especially men)

June 27, 2012
When I was on my seven mile run this morning, I got to thinking about all the tremendous changes that have taken place in my life since I adopted this active lifestyle. The more I started to think, the more I realized how helpful this information might be to other people – especially men (since I am of course writing this from a male's perspective). So below you'll find a list of random things that popped into my head today that I would like to share with you that have impacted my life in a positive way since I adopted this healthy, active lifestyle. Enjoy! 1. Larger (male) genitals Yes, throughout my life I have had many ups and downs in regard to my weight. In sixth grade I was rather chunky and unfortunately that stuck around for a while. So right at the time when we were starting to take showers after gym class in the sixth grade, I happened to be the big kid in the locker room. One thing I was always uncomfortable with back then was the size of my privates compared t
1 comment
Read more
© 2020