how to live naturally

December 05, 2011
It's safe to say that I've been on an ever-growing "health kick" since I made the choice to change my life and began loosing weight a few years ago.

When I first started out, I didn't entirely understand what was happening to my body - or why. All I knew was that I was exercising more than I had ever exercised before in my life and that I was eating healthier and far less often than I used to. But everybody knows that in order to lose weight you have to diet and exercise; that much was clear.

What I wanted more than anything was to understand precisely why these changes were occurring. What was I doing that triggered my body to shift gears? Could the same results be achieved by just anybody - or was I special?

In my pursuit for answers I inadvertently discovered a great deal about how we were actually designed to live our lives. As you might have guessed by now, it is drastically different from the way most Americans are choosing to live. Here is a bit of what I have learned thus far.

Humans have survived this long by following a simple set of basic human principals. According to Abraham Maslow's theory, our most fundamental human needs (from least to most important) are as follows: 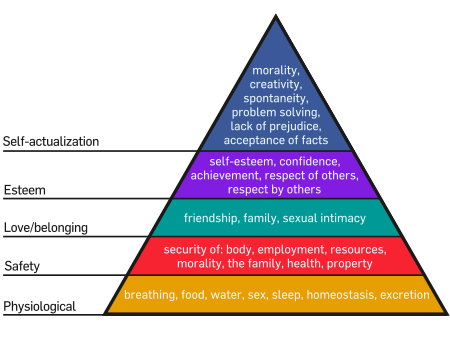 Many people - myself included - happen to agree with Maslow's theory. And I would bet that the early humans who roamed this earth would have likely lived in accordance with these same basic principals.

Notice how at the bottom of the pyramid, Maslow suggests that the most important human needs are; breathing, food, water, sex, sleep, homeostasis and excretion. The next most important are the security of our: body, employment, resources, morality, family, health and property.

The more time I spent thinking about Maslow's theory, the sooner I realized that I had taken my physiological (basic) needs completely for granted. I had selfishly made my friendships, sexual intimacy, esteem and employment a top priority over many other things that truly mattered to me.

I had let myself go - in more ways than one.

But the reason that my body (and life) were transforming was due to the fact that I had instinctively already begun rearranging the priorities in my own life to better fit who I was and what I valued most as an individual.

I had given up my car in exchange for bicycle transportation that was not only far less expensive; it also provided me with enough daily exercise to keep me energized for the entire day. I stopped living my life trying to impress everyone around me with fancy materials and instead started appreciating the things I already had.

I replaced the junk food that I was putting in my body with fresh, healthy fruits and vegetables. And instead of drinking sugar-packed energy drinks and soda, I chose to drink only water. Instead of staying up all night and partying, I made sure that I was getting to bed at a decent hour and logging at least six hours of sleep every night.

Rather than gripe about how much money I was making, I started focusing on doing work I actually enjoyed and that was in line with what I valued.

In short - once I had my basic needs balanced and at a level of homeostasis - my: fitness, place of employment, level of resources, sense of morality, family life, health and appreciation for my belongings all started improving and balancing out synchronously. And so it went until every one of my needs leveled out naturally.

What you eat makes all the difference

We have all heard the saying, "You are what you eat."

After seeing a lot of different documentaries, reading a lot of books, and spending many hours studying - and losing over 100 pounds - I can conclude that this is an absolute fact.

On my quest to explain why my body was changing, I learned a great deal about nutrition and why changing my eating habits had played such a significant role in my weight loss.

In a previous post titled how to lose weight the proper way, I explain macro nutrients and how your body makes use of them:

To help you better understand the differences between the three, I found this chart that will help explain the importance of eating a well balanced diet that focuses primarily on eating a variety of whole grains, fruits and vegetables. 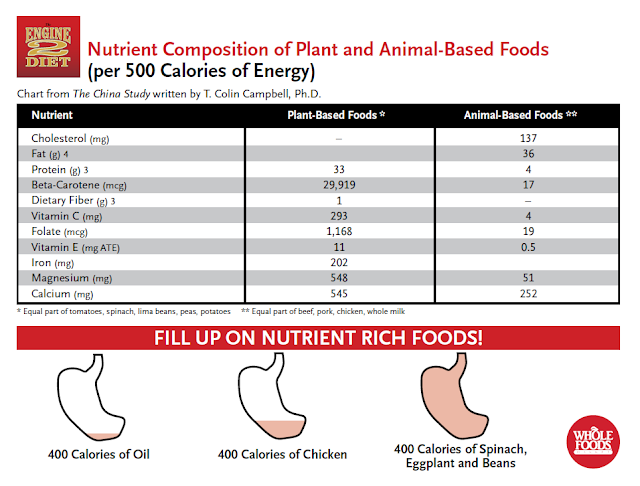 As you can see, 400 calories of Oil (fat) will not take up very much space in your stomach, nor will 400 calories of Chicken (protein). This is the primary reason that obesity has become such a huge epidemic in this and many other countries around the world.

As Charlotte Gerson of the Gerson Institute once stated, "Obesity is a problem of hunger."

We are simply eating too many calorie-dense foods that are failing to fill us up, and are certainly failing to properly nourish our bodies. By eating these foods, we are getting more than enough calories to survive but we never feel full; our bodies are still craving nourishment. Consequently, this cycle will perpetuate until we feed our bodies the nourishment it needs.

As you can see from the chart above, by eating a plant based diet not only will our stomachs get fuller on fewer calories but we will also be receiving significantly more nutrients from these plant based foods than from the animal based foods.

So this pays off two-fold:


Once I understood what this meant, my entire life was forever changed. I started paying closer attention to the food I was putting into my body. I would think twice before I endulged in a meal at a restaurant. Eating a fatty burger from McDonald's® or Burger King® seemed far less appealing to me after learning about all of this - and I found myself ordering a lot more salads instead.


"Twenty years from now you will be more disappointed by the things that you didn't do than by the ones you did do. So throw off the bowlines. Sail away from the safe harbor. Catch the trade winds in your sails. Explore. Dream. Discover."

So may you have the courage to take control of and save your life. If there is something about the way that you are living that is in-congruent with who you really are, may you have the wisdom to recognize and put a stop to it. May you stand up for who you want to be and have the strength to change your life for the better. And may you one day feel the satisfaction of knowing you did it all yourself.

Popular posts from this blog

January 13, 2012
When I first started running in the summer of 2009, I was definitely not the runner I am today. I was slow, I was inefficient, and like most beginners, I struggled to get through my daily runs. Over the past two years however, I have learned a lot about running. The majority of what I learned came from reading books and magazine articles. They gave me a lot of helpful pieces of advice that uniquely improved my running performance. These tips were invaluable, and I am grateful for the incredible people who took the time out of their busy lives to write down what they learned, so that people like me could benefit from them. To pay homage to them, I thought it would be nice if I wrote down a few things that I have picked up along the way that might benefit you in the future. So here we go! 1. Less is more. When I first started running, I was completely horrible at it. I had no idea what I was supposed to do. Naively, I thought I could just strap on a pair of running shoes and e
7 comments
Read more

awesome secret to help you exercise every day

January 20, 2014
I was thinking about this the other day and I realized that I have unknowingly developed a rather fool-proof system which has, regardless of the weather or how busy I am, really helped get me motivated to work out every single day for over four years! So what is this incredible, awesome, bad-ass system you ask? Simple... I do NOT  allow myself to take a shower unless I have earned it through working out/exercising for at least  30 minutes. As a side note: said workout also has to get me relatively smelly and/or sweaty... and no... there are absolutely NO exceptions... If I need to be somewhere and I want to take a shower beforehand, guess who needs to make some time to work out an hour prior to leaving? You guessed it... At this point you probably think I'm crazy, but this system is actually quite beautiful once you get it installed in your own life. For me, taking a shower has become such an integral part of my daily routine that I honestly have not had the optio
1 comment
Read more

why you should exercise (especially men)

June 27, 2012
When I was on my seven mile run this morning, I got to thinking about all the tremendous changes that have taken place in my life since I adopted this active lifestyle. The more I started to think, the more I realized how helpful this information might be to other people – especially men (since I am of course writing this from a male's perspective). So below you'll find a list of random things that popped into my head today that I would like to share with you that have impacted my life in a positive way since I adopted this healthy, active lifestyle. Enjoy! 1. Larger (male) genitals Yes, throughout my life I have had many ups and downs in regard to my weight. In sixth grade I was rather chunky and unfortunately that stuck around for a while. So right at the time when we were starting to take showers after gym class in the sixth grade, I happened to be the big kid in the locker room. One thing I was always uncomfortable with back then was the size of my privates compared t
1 comment
Read more
© 2020